Between the Sun & Moon lies a place to call home 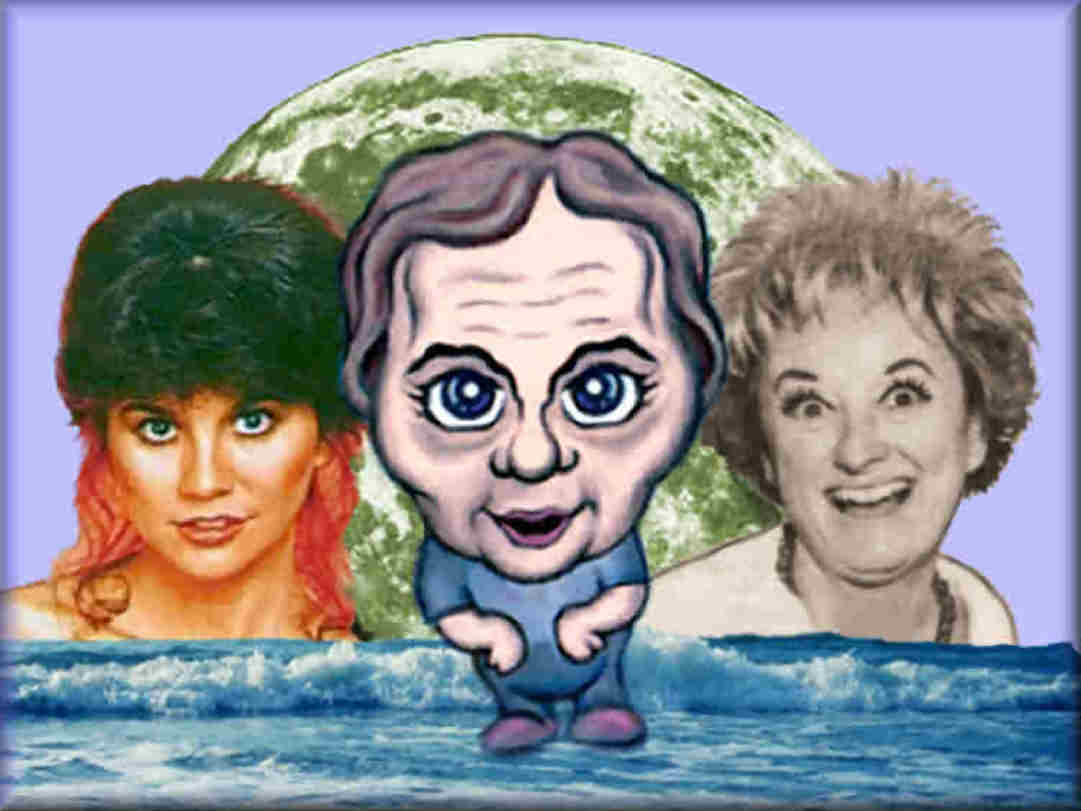 Here, we show facial photos of celebrities with Cancer Suns, as we will show how their Sun/Moon combinations define their nature given psyches–the place of comfort where they learn to interact with their environment.  Since these tidal waters are driven by the Moon (and the Zodiac sign of Cancer is ruled by the Moon), it is often difficult to separate the solar expressions and lunar reactions of people who have a Cancer Sun or Moon.  It is easier to detect when the luminaries are in different signs

Oddly, the makeup of Phyllis Diller’s psyche is remarkably consistent since her Moon and Sun are both in Cancer.  This”master crab” succeeded by making us laugh at her “crabby” interpretations of everything from housework to politics.  You may say she was noticeably mercuric and chatty.  What you saw was the mask of her Gemini Ascendant.

Linda Ronstad also displays the liquid facial features, as well as the distinctly rounded temples of the Crab.  However, this lady’s “psyche center” was far more restless and impulsive. Her Moon is in rebellious Aquarius, and her Sagittarius mask does little to restrain her quixotic reactions.

Find a place of comfort, in your surroundings

In psychology, the psyche is defined as “the center of thought, feeling, and motivation that consciously and unconsciously directs the body’s reactions to its social and physical environment”. I.E., it is the motivating force that comes from one’s expressive and emotional reactions.  In astrological terms, this center between one’s emotional reactions and the manner in which they explain and project their “personal feelings” is seen in the projecting and reflecting lights of one’s astrological luminaries.  The qualities of these Suns and Moons are defined by the Zodiac Signs in which they were placed at birth.  If you check out the astrological luminaries of people you know, you may be surprised at how well they define the nature of their psyche.

For those that you know who have a Cancer Sun or Moon, you may recognize this characteristic: When the Cardinal Water of Cancer gushes into the room, be prepared to be emotionally moved. This is due to the fact that water runs the emotions, and it is one of the passive (feminine or introverted) signs of the Zodiac.  One can be easily drawn into their emotional field.  With Cancer Suns and Moons, the internal draw of energy saturates the watery flesh. Note how it tends to swell and then recede, with the turning tides of the Moon.

Since the tides are constantly turning, these crabs have a habit of latching onto any  “anchor” that may appear in their turbulent environment.  This  gathering and hording of “stuff” adds to their sense of security.  It also keeps their closets filled with treasured bootie.

This placement in an environment of constant movement is also seen in the other Cardinal Signs: Libra, Capricorn and Aries

Celebrities display the traits of their Cancer Suns

These facial photos of six Cancer Crabs show how the driving “tidal force” of cardinal water shapes the physical traits of their Cancer Sun Signs.  Here, we will also show how these solar projections interact with different lunar reactions, to create the combination of forces that becomes the psyche of these individuals.

Princess Diana, Meryl Streep and Jane Lynch show us how the cycling cardinal tides affect the expressions and the physical traits of Cancer Suns.  With their different Moons, these three ladies have their own special “psyche center”–the spot of comfort that lies between the Sun and Moon.

Jane’s Aries Moon makes the reflective half of her psyche very assertive. Princess Di’s Aquarius Moon made her the most rebellious. The contrast can be seen in Meryl’s feminine and fixed Taurus Moon.   She appears to be the most emotionally contented of the three.

Harrison Ford‘s emotional tides shift consistently and rather evenly.  This is a person who quickly returns to “his base” to secure his comfort, for (like Phyllis Diller) he has a Cancer Moon.  On the surface, he also appears markedly relaxed and serene.  His Ascendant is in Libra.

With his Cancer Ascendant and Sun, the Dali Lama shows the the round temples and the facial features that mock a crab’s shell.  He also appears well anchored in his comfort zone.  But watch closely, and you will see that he is constantly consumed in analyzing the details in his surroundings.  His Moon is in mercuric Virgo.

The photo of Benedict Cumberbatch displays the welcoming eyes of the crab,  as they turn upward–to view the world from their home on the bottom of the Sea.  Benedict also appears markedly relaxed and balanced.  His Ascendant is Libra (the same as Harrison Ford).  The difference is: When Benedict gets emotional, this serenity quickly evaporates. Like Jane Lynch, his Moon is also in Aries.